The maps will be updated in intervals, with a mass telegram sent to the entire region informing it of one. Only then will claims sent to the Founder of the Erviadus Galaxy be considered.

The Erviadus Galaxy is the setting of our eponimous region. It is the currently only galaxy inhabitable by players. 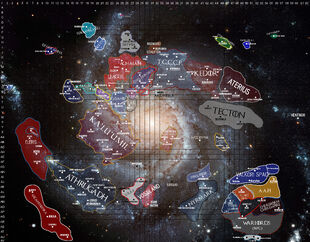 Map of the Erviadus Galaxy, November 2019
Add a photo to this gallery

[NPC] denotes a nation that is not actively played by a player, and instead relies on interaction by all other players in the region. Therefore, you can set an RP of yours in it or use it to facilitate somekind of event - in any case, the nation cannot be destroyed and serves its purpose for lore.

The Galactic Core cannot be settled or traversed.

Ingos Tenum is a major planet of the Erviadus Galaxy, located within the Risolas System and the origin of many of the galaxy's major and minor nations. Serving as a central point for much lore of the galaxy, it was once a hub world for players to settle on, but it is no longer available to be settled. 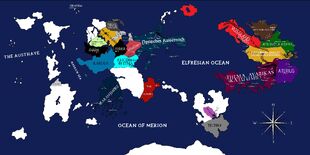 Map of Ingos Tenum, September 2018
Add a photo to this gallery
Retrieved from "https://erviadus-galaxy.fandom.com/wiki/Maps?oldid=16824"
Community content is available under CC-BY-SA unless otherwise noted.